We can probably all relate to the frustration of relaxing on the couch after a long day when a small bug comes flying out of nowhere. Worse yet, it seems that no matter how many times you’ve tried to swat it away, you can never quite catch it. So much for trying to unwind, right?

If you’ve found yourself in this situation or another one just like it, you’ve come to the right place — so allow us to introduce you to the Katchy UV light bug trap. We’ve tested out a lot of indoor insect traps, but the Katchy blew them all out of the water.

A New Kind of Indoor Insect Trap: Stick, Not Swat

The way the Katchy works is fairly simple. Bugs are attracted to the UV light and then sucked down by the internal fan. This deposits them onto the sticky pad below.

One of our favorite features here is that it doesn’t have noisy zaps like other indoor fly traps we’ve tested out. Better yet, this means it’s safe to be around curious kids and pets.

We’re also partial to the “Auto Mode,” in which you can click a button that will enable the Katchy to turn on when it’s dark. After all, it’s easier to attract bugs with light when it’s dark outside. With this feature, you won’t waste electricity by running it during daylight hours, when there really isn’t a point to do so. 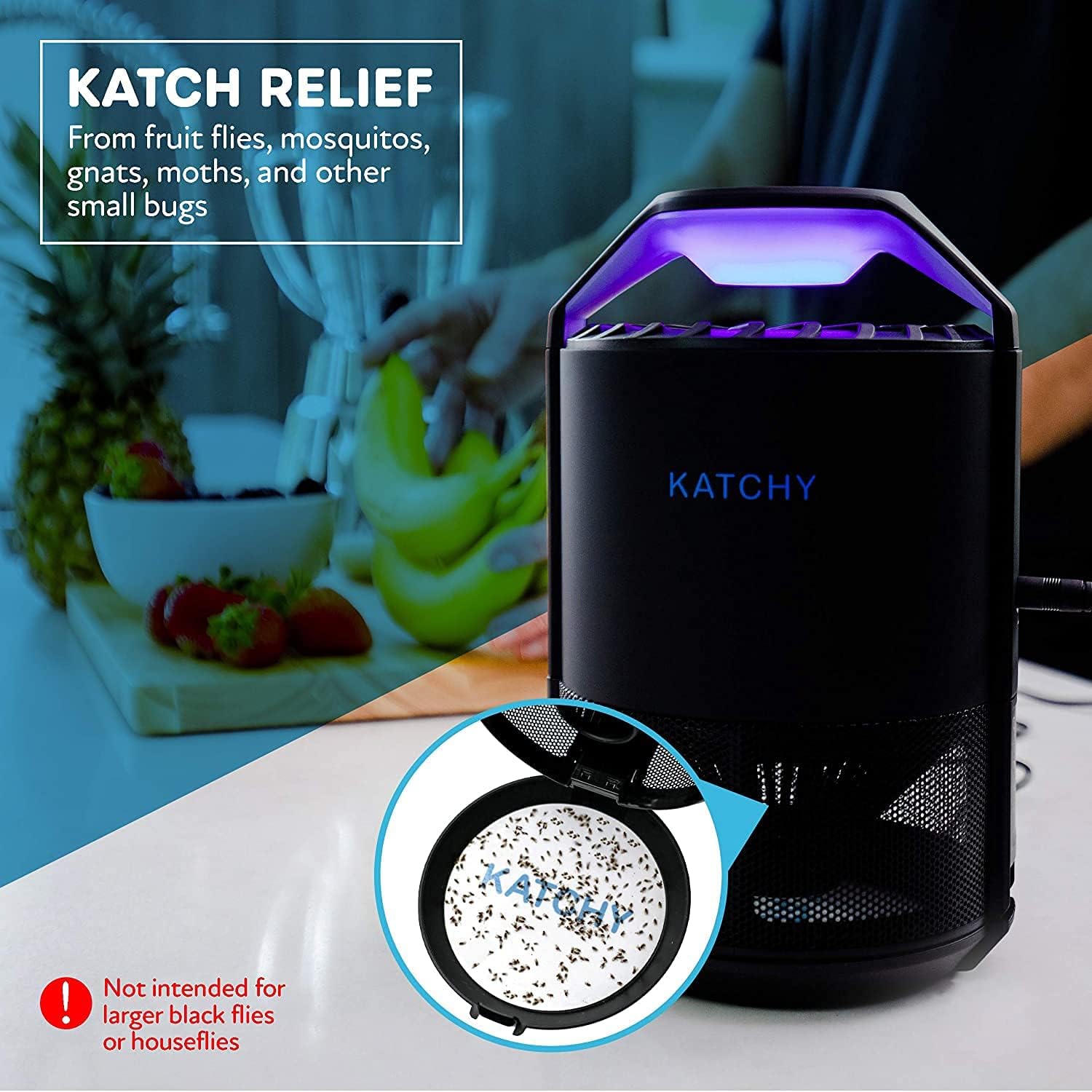 What Bugs Does Katchy Trap?

A lot of indoor insect trap products promise a solution for all pests, but we’ve found that many of them are too good to be true.

Katchy, on the other hand, helps eliminate fruit flies, gnats, mosquitos and moths. In our experience, it even caught a large gold beetle once, as well.

It’s worth noting, though, that the Katchy won’t be effective against bugs that aren’t attracted to a UV light, such as houseflies, ants and roaches.

Where Does Katchy Work Best? 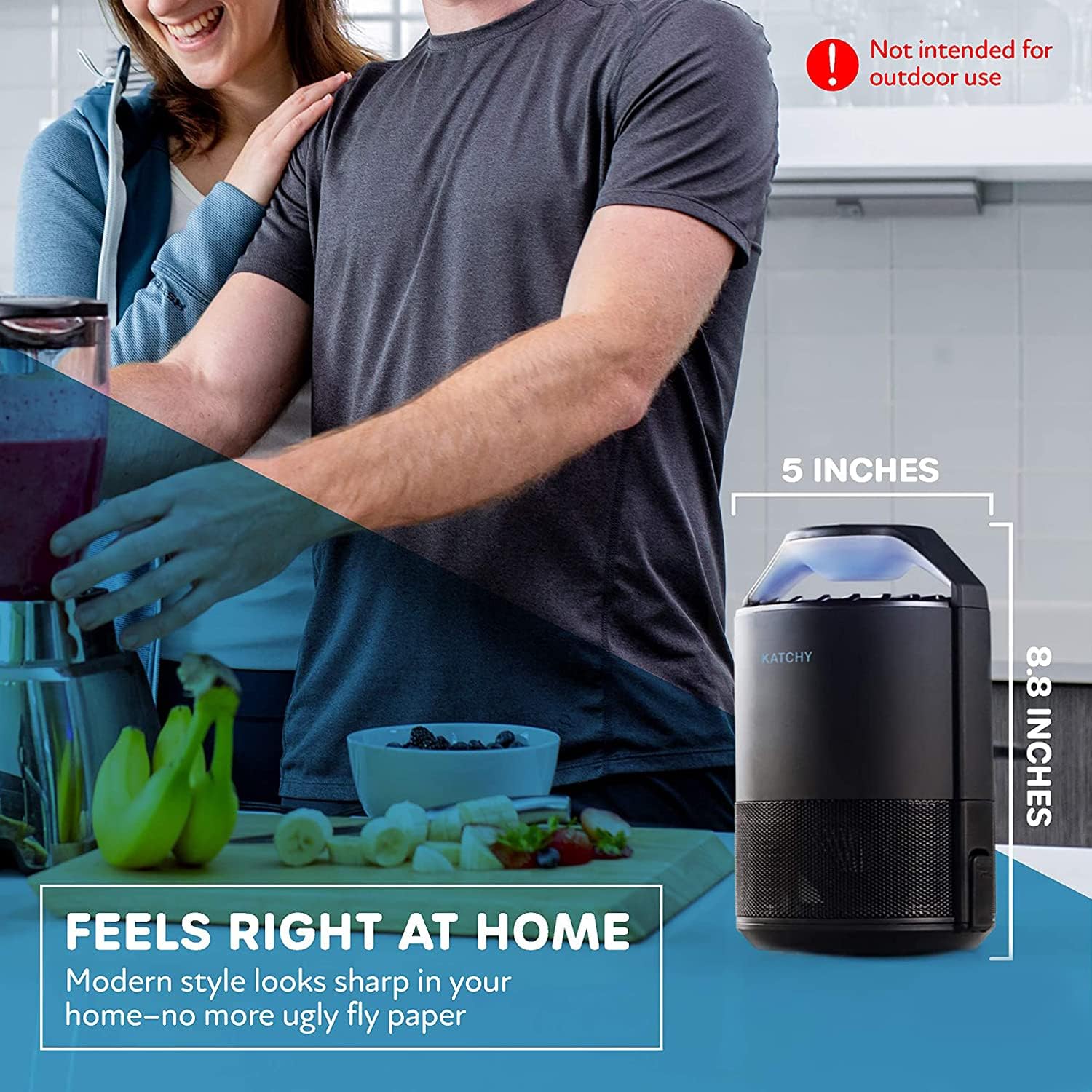 During the course of our research and testing, we tested out two Katchy traps in many different rooms. As we mentioned earlier, the UV light only attracts bugs that can see it — so it won’t work outside of the room that it’s placed in. So if you have different areas of your home that need a mosquito trap or fruit fly tap, you’ll probably want to move it around periodically or invest in multiple Katchy devices.

To that end, here are some of the places Katchy really shines with flying colors:

We have a Katchy permanently set up on the countertop in a corner of our kitchen. It has eliminated fruit flies, gnats, moths and mosquitoes that are attracted to the fruits and vegetables, or even through the drains. If we leave fruit out of the fridge, we leave them close to the Katchy to remain fruit-fly free.

Like many, we love our houseplants. But one of the downsides of all that indoor greenery is that gnats can be a near-constant issue. Having a Katchy running next to plants keeps the gnats at bay.

We also tested out a Katchy in a small bar setup in our dining room. As you can imagine, fruit flies and gnats love little spills of alcohol and mixers.

When we use the bar regularly or have people over for drinks, we move the Katchy next to it to distract it. Works like a charm.

If you live in a warm climate with a lot of mosquitoes, we don’t need to be the ones to tell you that summer can cause a headache in terms of eliminating pests. We recommend moving a Katchy to the bedroom or next to a couch in the living room to help alleviate this. In fact, the Katchy is so quite that we can assure you it won’t disturb your sleep or interrupt your Netflix show.

How to Replace & Reload

One of the best things about the Katchy is how easy it is to replace the sticky traps. There’s a button on the side that is easy to press — so don’t worry about prying the bottom off, or grabbing your toolkit. Once you do that, open the hinged compartment and take out the trap to replace it with a new one. Since it’s a sticky trap, there won’t be any loose bugs to catch.

We recommend giving the compartment a wipe down with paper towels if it’s a bit dusty, but otherwise, there’s no cleaning required.

Each Katchy comes with four sticky trap sheets, but you can buy eight packs of their refillable glue boards when you run out. We change ours whenever they start to look full or when the stickiness seems to be fading.

To help you decide if the Katchy indoor insect trap is right for you, we’ve put together this handy list of pros and cons:

How do you trap flying insects?

Many indoor insect traps, including the Katchy, use purple UV light as bait to attract the bugs. From there, the pests will be sucked down to the sticky surface where they get trapped. With other devices, a cap full of apple cider vinegar next to it can help lure more bugs, but the Katchy is so effective that you won’t need to do so.

Where do you put a bug trap?

To get the most out of your bug trap, you’ll want to think about where you put it. After all, if you can’t see the light, chances are the bugs can’t either; that’s crucial to making sure the device works properly.

Thankfully, the Katchy is a fairly sleek-looking device, so chances are you won’t mind it being somewhat visible in your home.

Bug traps work very well, but you shouldn’t expect immediate results. In fact, it took us a few days to notice a difference in the number of flying bugs in the house. But after the first week, the gnats and fruit flies were virtually nonexistent.

All you’ll have to do is set the Katchy and forget about it for a few days. You’ll see results before you know it.

We’re clearly big fans of the Katchy here at Home Air Guides, but it’s easy to see why. It’s a simple yet effective tool in helping to keep your home free of pests and bugs no matter the season. And at only a $40 price point, it’s an affordable tool that can pay off in the long run and then some.